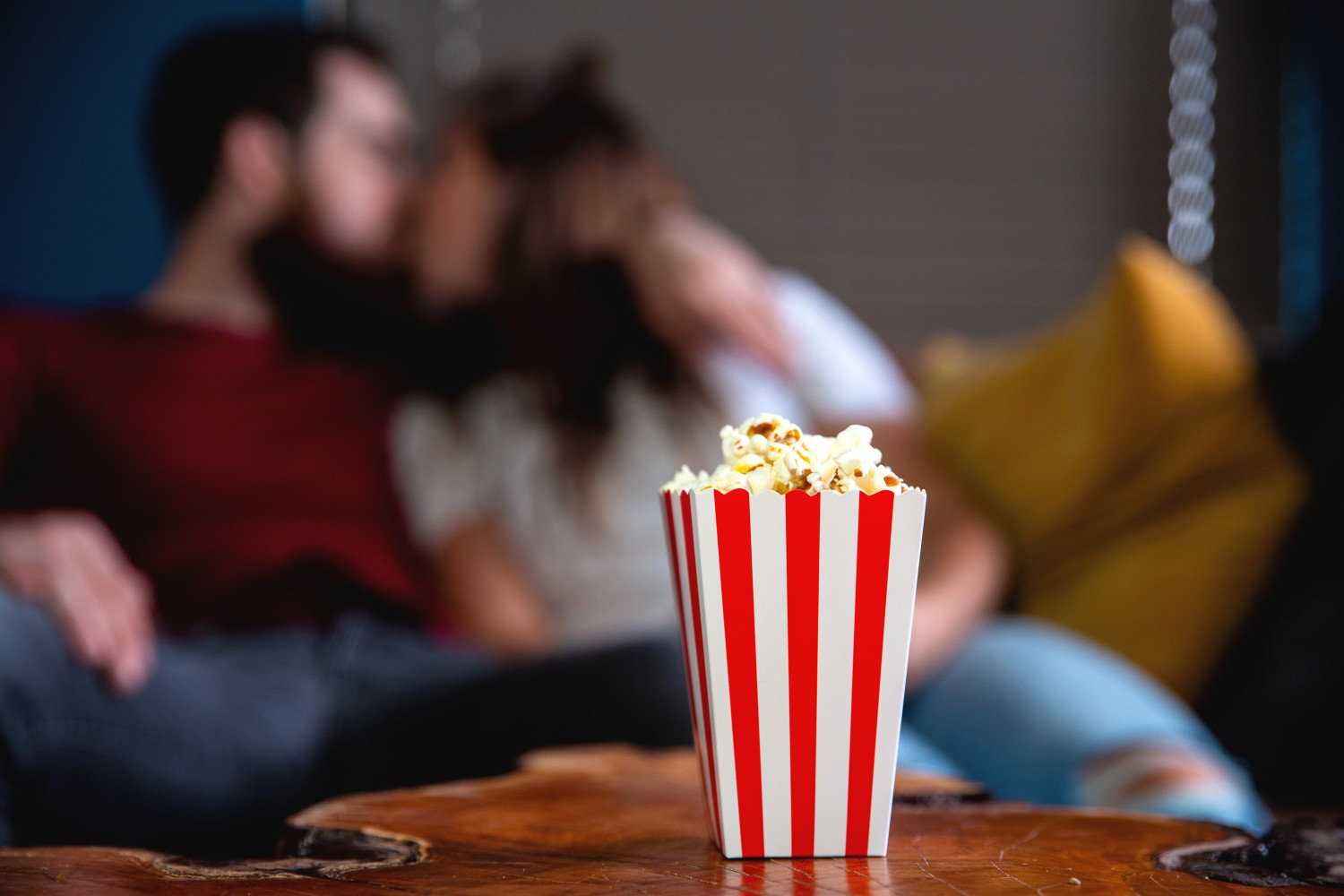 As the sun makes its way down, the colour of the night engulfs us around. The silhouette of the trees can be seen in the shimmering moonlight. The oppressive heat gives way to a mild breeze. The leaves rustle and the crickets come out for their nightly routine. With a glass of wine in my hand, I observe the world slowing down its pace. My imperfectly-perfect companion lays down a bowl of homemade ravioli in front of the idiot box. He gives a mysterious smile and I raise my eyebrows to question the expression. He pulls me down towards him and puts an arm around. My gaze wanders to the TV across the room and stops short. What Flashes on Screen is a List of the ‘Best Web Series to Watch – Romance and Desire’ to titillate some of our hidden Guilty Pleasures!

While talking about Sexual Desires was considered a taboo a decade or so ago, perceptions have now changed drastically. A lot has to do with a classy approach of on-screen depiction of sexuality. A topic which was earlier considered hushed and behind closed doors, is more openly discussed now-a-days. Parents feel comfortable discussing sexuality related do’s and don’ts, precautions and fallouts with their children, and the children are bought up in an environment where they feel comfortable talking about it. Physical Desires are no longer a topic to shirk, smirk or tuck behind. On the contrary, it is as natural as living and breathing.

Best Web Series to Watch – Where it All Began

There was a time some thirty years ago when the original ‘Baywatch’ played on Television. David Hasselhoff as Mitch Buchannon and Pamela Anderson in her ‘Hot Red Lifeguard Swimsuit’ running across the sand and saving lives was a sight to behold. This was followed by Ridge Forrester and Brooke Logan in the masterful ‘The Bold and the Beautiful’. The night finally ended with an hour long episode with the Carrington Family in the original ‘Dynasty’ Series. They all had one thing in common. The content largely depicted intense sexual desire, an extra marital affair in the mix along with unrealistic expectations of love, affection and loyalty.

Times have changed, the convention discarded and storylines updates – but what remains constant is the raging popularity of the ‘Best Web Series to Watch loaded Guilty Pleasures’!

1. The Quintessential Watch – ‘Game of Thrones’ (GOT)

There will be just about a handful of those who did not begin their web series journey with the ever popular Game of Thrones. Laced with Intricate Politics, Deceit, Manipulation and a lot of Guilty Pleasures – Game of Thrones takes the top position not only for the explicit incest scenes between Jamie and Cersei Lannister or the aggressive Khal Drogo with Daenerys but also for its addictive storyline. Based on a series of books by George R.R. Martin, Game of Thrones evolves in a mythical land of Westeros with noble families wage war to gain control and establish their dominance. With brutal throat slashing to nude marching – Game of Thrones is undoubtedly one of the Best Web Series to Watch invoking your hidden sexual desires.

Where to Watch Game of Thrones (GOT)? – Disney+ Hotstar and Hulu

Spin Off – House of the Dragon

The rebellious Thracian Spartacus is forcibly ripped away from his home and separated from the love of his life. He is forced into slavery when he is sold to the Gladiator trainer – Batiatus. This Web Series is based on a lot of action, killing, blood spurting and borderline pornography. This Series is based on the Slave Uprising from 73 to 71 BC against the Roman Republic. Gladiators, with their chiseled frames and ripped muscles get the heartbeat soaring in this Historical Web Series with wild sex and a whole lot of seduction.

3. A Perfect Mix of Loyalty, Obsession and Deceit- ‘The Affair’

Alison, an anguished waitress develops feelings for Noah, an accomplished writer and from there begin their story of an extra-marital affair in ‘The Affair‘. Love, on the borderline of obsession, this web series has some of the most intense sex scenes across all seasons. It braces the less discussed subject of guilt and regret surrounding those who indulge in sex or emotional support outside marriage – the devastating effects on their mental health and their respective marriages. It also deals with troubles of a monotonous marriage and asks basic questions on loyalty. While you fall in love with the intimacy and chemistry between Alison and Noah, the sexual tension that follows in every scene and their pain of not being able to let go is not far behind. This is one of the best romantic TV Shows on an OTT Platform!

Where to Watch The Affair? – Amazon Prime Video

4. The Science Behind Sexuality – ‘Masters of Sex’

Masters of Sex – Must Watch

Based on a True Story on the lives of Dr. William Masters and Virginia Johnson, who are known as leaders in the science of human sexuality, this Web Series studies the physics, chemistry and biology of human desire. Largely focused on Female Orgasm, Dr Masters along with his novice assistant Virginia, conduct experiments where they themselves offer to become subjects. In this process, the science turns to love and they break the conventional society shackles to discover themselves. One of the Best Web Series to Watch with Sex, Seduction and Desire, it is a sure shot watch if you really want to understand Female Sexuality!

Where to Watch Masters of Sex? – Amazon Prime Video

When destinies are intertwined, not even centuries can keep two people apart. When Jamie Frazer calls Claire Randall ‘Sassenach’ , the heart of every woman watching Outlander leaps a little; dances a little; pounds a little. As Claire leaves her grown daughter to come back to Jamie through the stones, every man watching Outlander would give an arm and some more to make Claire magically appear in his time zone. While the Sex is unmatchable and the Nudity is subtle, the emotional upheaval these two create in our lives, in our hopes and in our dream is unstoppable. Watch this if you prefer time travel and historical Scottish Love Stories which will transport you through time and space. This is one of the best and the most Romantic TV Shows to watch on Netflix!

Where to Watch Outlander? – Netflix

6. The English and their Sexual Desires – ‘The Tudors’

When Jonathan Rhys Meyers, with his dreamy eyes and drool-worthy torso rips the flimsy cloth off his on-screen sister-in-law Natalie Dormer, the uncontrollable sexual desire of Henry VIII and the lust for power of his future Queen Anne Boleyn is for all to see. The Tudors brings to life the many women in the life of the infamous King of England. It blatantly portrays his obsession with a son as his heir and his brutality against women who no longer served to fulfil his sexual appetite. This is one of the hottest TV web series with a lot of guilty pleasures, but does little good to the reputation of the Kingdom of England. Watch it for some medieval era romance and for the drop-dead gorgeous Henry Canvill!

Where to Watch The Tudors? – SonyLIV, Showtime

While these are the Best Web Series to Watch invoking titillating sexual feelings with a dash of Action, Emotion and Drama – there are several others which I have watched for some guilty pleasures. Sex/Life will surely score as a short, steamy and extremely titillating show on Netflix. Dark Desire is a Spanish Erotic thriller that will keep you wanting for more. My last recommendation here is not a Web Series but a Movie Series – 365 Days. While some of you may roll your eyes and shake your head at the mention of this Series, watch this Italian-Polish Movie purely for Michele Morrone, his voice, the tattoos and the unbeatable ‘Boat Scene’…You will surely thank me for it! 😉

Couple Goals – For The Perfect Relationship